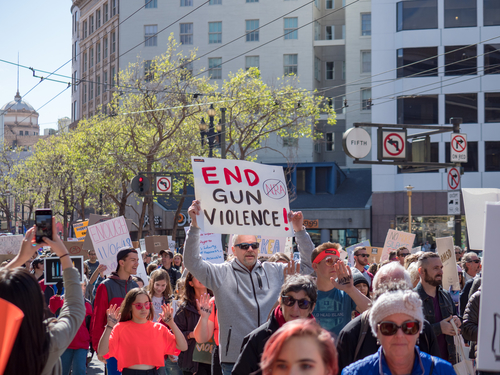 The phrase, “thoughts and prayers”, has become a touchstone of controversy in recent years. The phrase has become repeated so often that the meaning is stretched thin. In modern society in which social media provides instant, ready knowledge of the trials and tribulations that face people to whom we are digitally interconnected, the phrase has become trite.

Diagnoses of cancer and other health maladies, deaths of family members or friends and other circumstances that bring the pain and suffering of others to mind often evoke responses that include thoughts and prayers. It’s a polite, but increasingly empty, thing to say. Particularly in response to all the offerings of thoughts and prayers in response to mass shootings in the last few years, a backlash has even arisen against the use of that phrase.

I assume the sentiment includes the implication that something needs to be done about the problem, and thoughts and prayers don’t get done whatever it is that needs to be done. One CNN article observed after the Parkland shooting, “Among the earnest pleas for social and legislative action, the aftermath of each successive shooting inspires more and more memes and cynical jokes.” (How ‘thoughts and prayers’ went from common condolence to cynical meme)

The point, with the mass shootings, which is well-taken, is that offering platitudes isn’t enough of a response to such a systemic, serious societal problem. “The further [the phrase, thoughts and prayers,] is embedded in our post-tragedy lexicon, the more it’s mocked as a form of civilian slacktivism….”

Of course, part of the problem is that we can’t agree on whatever it is that needs to be done. For as many cries there are for more legislation to limit guns, there are calls for more guns to arm law abiding citizens to combat the lawless ones. In that context, the critical, cynical snarky remarks about thoughts and prayers expresses one particular political persuasion that promotes tougher gun legislation.

When powerful politicians (who are in a position actually to “do something” about the problem) offer thoughts and prayers, while deflecting talk of gun controls and opposing attempts at more effective gun legislation, the phrase takes on a “form of political obfuscation” that sparks the ire of people who want change.

On the other hand, that cynical response often looks like a shotgun blast, implying (or assuming) that all people offering thoughts and prayers oppose gun legislation (and have no intention of doing anything about mas shootings). It conjures up the stereotype of the gun-toting religious conservative.

God, country and guns may be one characterization of a particular political platform, but it certainly doesn’t include all the people who offer thoughts and prayers. Not all “religious people” are of the same color. If we are going to heal and advance as a nation against the scourge of mass shootings that has scarred our societal landscape in the last several decades, we need to bridge the gaps between people of good will and stop burning bridges.

In fact, I suspect that our growing insensitivity, incivility and lack of respect for people who “don’t think like us” contributes to the socio-psychological environment that spawns mass murderers. I don’t think that connection is a leap, though I can hear the counter voice in my head accusing me of “blaming the victims”.

If there is one thing that is sacred in modern American society, it is victimhood. I know that’s a snarky comment itself, but let’s be real here. I am not blaming the people who got shot. They didn’t “deserve” to get shot.

We have to get past the binary political attitudes. We can’t get anything done that will affect a real societal change by objectifying, vilifying and pissing off half the population. We need to find common ground.

My hope is to start building a bridge with this piece by offering some thoughts on thoughts and prayers and suggesting some ways to work together, rather than against, each other. So, first my thoughts (and prayers).

I start with this question: what does a person say (or do) when something happens that is catastrophic and beyond our power and ability to help someone we love or a community we love? Especially in the first instance of hearing about a tragedy, what do we say?

Offering thoughts and prayers is actually doing something. It is aligning with the people who have suffered tragedy. It is letting them know they aren’t alone, and we care.

The problem is that the statement suffers from “semantic satiation”. When a word or phrase is said often enough, it loses its meaning and “becomes something ridiculous, a jumble of letters that feels alien on the tongue and reads like gibberish on paper.” And, let’s face it: after so many mass shootings in such a compressed period of recent history, it begins to ring hollow. It just does.

I feel that way when I offer those words myself. Am I really thinking? Am I really praying? So what if I do! Is it really helpful? Does it mean anything anymore?

Maybe it’s because we are now more aware of the suffering of people than ever before. I know the intimate details of hundreds of people I haven’t seen in ten, twenty, thirty plus years. They show up like a personal nightly newscast… morning, noon and night.

But, not only that, our society has changed. Mass shootings were unheard of prior to the 1960’s. By the 1980’s, they were virtually commonplace. (See A Brief History of Indiscriminate School Shootings)

The challenge, then, is to find a way to express genuine caring. For some, “thoughts and prayers”, doesn’t cut it anymore. It’s a worn-out statement that has been said so many times that it has lost its meaning. Maybe we need another phrase (but, of course, that phrase will become worn out too at some point – condolences has lost similar meaning for me).

An alternative is to mean what we say. I think about this every time I am faced with someone else’s personal tragedy. Do I mean what I say? Am I really thinking and praying?

Of course, I am thinking about them…. In that moment, anyway. For me, when I offer that ubiquitous phrase, I don’t do it without actually praying. But truth be told, it’s a quick offering. I may or may not have too many more thoughts or offer another prayer as time goes on.

This thought process may seem supercilious for a person who doesn’t believe in God or doesn’t believe in a God who hears and answers prayers. I get it. For me, though, I do believe in such a God. So offering prayers is one of the most meaningful and effective things I can do, especially because I really can’t do much else (usually).

If we believe in God, we believe He can do what we can’t. (That, of course, raises all kinds of different issues that have been summed up in the phrase, “problem of evil”, and that is a topic that is beyond this piece, but it is one that needs to be grappled with. See Another Look at God in Light of the Evil in the World)

The thing that really needs to be discussed, and this is where we can bridge a gap and do something, is that thoughts and prayers are not enough – not for the skeptic, and not for the believer either!

First, for a little understanding for the skeptic (and believer alike, perhaps). The Bible is clear that thoughts and prayers without action won’t cut it:

What good is it, my brothers, if someone says he has faith but does not have works? Can that faith save him? If a brother or sister is poorly clothed and lacking in daily food, and one of you says to them, “Go in peace, be warmed and filled,” without giving them the things needed for the body, what good[a] is that? So also faith by itself, if it does not have works, is dead…. For as the body apart from the spirit is dead, so also faith apart from works is dead. (James 2:14-17, 26)

The answers for different people may be very different, of course, but we can’t fool ourselves into thinking we have done enough by offering thoughts and prayers and fail to ask the follow up question. If we do that, our faith is hollow – as hollow as skeptics already think it is.

On the other foot are those who call for gun legislation. I can tell you that many have a perception of that response that is similar to the negative response to thoughts and prayers. I’ve already noted that legislation is a bandaid. Not that we shouldn’t apply the bandaid, but we can’t fool ourselves into thinking that banning guns (even if we could do that) would solve the problem that motivates a person to take a life, let alone take many lives in an indiscriminate mass shooting.

“There ought to be a law” is a convenient response. It’s an appeal to a higher authority (like prayers to God): legislators, do something! We can’t call for legislation and fool ourselves into thinking we have done enough. It’s only a bandaid. We have to ask the follow up question about what is going on in a society that produces so many mass murderers? And, what can I do about it?

Even people who don’t agree on the effectiveness of gun legislation (or prayer) can come together to talk about what can be done to get to the real issue in our society that has lead to a rash of mass shootings in the last four decades. What changed in the 1960’s that opened up this Pandora’s box? After we offer our thoughts and prayers and/or call for more gun control, we should be asking the follow up questions. We can and should ask them together.

One thought on “Thoughts on Thoughts and Prayers”