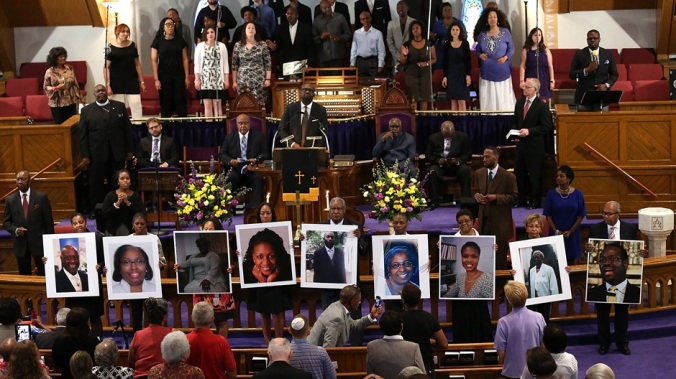 The recent shooting in Charleston is a continuation of the seeming explosion of racial tension in this country, but there is a crucial difference. It is hard to imagine that we could endure another tragedy with racial overtones following the Trayvon Martin case, police shootings, rioting and other examples that racial wounds have not yet healed, but the shooting at the Emanuel AME Church shows us there is hope.

Although the racial motivation of the shooter was clear in all of its ugliness, there was no looting or rioting in the street. In place of the reactions we have become accustomed to, there were prayers, worship, shouts of “Alleluia” and “Praise the Lord” and even thanksgiving and rejoicing. How Charleston’s Emanuel AME Spent Sunday after Massacre

From the beginning the reaction in Charleston was different. Almost immediately following the killings, when the shooter first appeared in court, there was forgiveness and love. Shooting Victims’ Families Forgive Gunman in Court:

“I just want everybody to know, to you, I forgive you,” said Nadine Collier, a daughter of victim Ethel Lance, 70. “You took something very precious away from me. I will never talk to her ever again, I will never be able to hold her again. But I forgive you. And have mercy on your soul. You hurt me, you hurt a lot of people. But God forgives you, and I forgive you.”

“I would just like you to know that, I forgive you and my family forgives you. But we would like you to take this opportunity to repent. Repent, confess, give your life to the one that matters the most — Christ — so he can change it, change your ways no matter what happened to you. Do that and you’ll be better off than you are right now,” said Anthony Thompson, son of victim Myra Thompson, 59.

“We welcomed you Wednesday night in our Bible study with open arms. You have killed some of the most beautfullest people that I know. Every fiber in my body hurts. And I’ll never be the same. Tywanza Sanders was my son, but Tywanza was my hero. …, but may God have mercy on you,” said Felecia Sanders, whose son Tywanza was killed and who shielded her 5-year-old granddaughter by playing dead and lying on top of her.

“I acknowledge that I am very angry. But one thing Depayne has always [said] is that she taught me that we are the family that love built! We have no room for hate, so we have to forgive. I pray God on your soul … I also thank God that I won’t be around when your judgement day comes with him,” said Depayne Middleton Brown, sister of victim Depayne Middleton Doctor.

I have no doubt that many do not begin to understand these superhuman acts and expressions of love and forgiveness in the face of ugly, racist evil. People are even trying to explain this “confounding forgiveness” away. Stop Explaining Away Black Christian Forgiveness

We weep and mourn with these beautiful survivors who will face years of the pain of loss. Their love and forgiveness is amazing…. awe inspiring!  They are my brothers and sisters in the Lord. In Christ, there is neither black nor white; we are children of one God. Because God created all men and women, and created them in His own image, race is simply an expression of a God with infinite diversity and all-encompassing unity. We are all one who are called and enter into that calling according to God’s purpose.

In Christ, we are aligned by a purpose that is higher than any racial, ethnic or other difference.

Rioting, looting and anger are very human responses to injustice and ill will. But people who have put their faith in God the Father and Christ the Son who paid the ultimate price for our redemption do not respond according to the natural desires, as the survivors of the Charleston shooting have eloquently shown.

“Howard Thurman, an educator and theologian who inspired Martin Luther King Jr., wrote in his classic 1949 treatise, Jesus and the Disinherited, ‘It is clear that before love can operate, there is the necessity for forgiveness.’” Stop Explaining Away Black Christian Forgiveness. These words come to mind:

“[B]e quick to hear, slow to speak and slow to anger; for the anger of man does not achieve the righteousness of God.” (James 1:19-20)

We have confidence in those words and in God because we know God is just:

“Never take your own revenge, beloved, but leave room for the wrath of God, for it is written, “Vengeance is Mine, I will repay,” says the Lord.” (Rom. 12:19)

God who sees and repay each person according to their deeds. We have confidence that this world and this life is just an arena in which we exercise the choices God has given us. We choose either to participate in the redemptive purpose of God or to go our own way. And, if we choose to align ourselves with God, we have confidence that God, Himself, will wipe away our tears. In that day, there will be no more death or mourning or crying or pain. (Rev. 21:4)

The Difference Maker in the Charleston shooting is the survivors and their love that is rooted in their faith and faithfulness to God.  By their faith and their love they have swallowed up the hatred and the intent to trigger a racial war. They have been true to the higher power of love and forgiveness that unites people under a higher purpose and order.

As one commentator observed, the shooter chose the wrong people for his intention to begin a racial war. (DYLANN ROOF’S FATAL MISTAKE) Such a plan to work evil cannot succeed in the presence of such love.

“People so often underestimate the Christian conviction that the ends do not justify the means. The ultimate goal is not to achieve justice in this world, though we pursue that with all of our souls, but to be faithful to God. We believe, ultimately, that faithfulness is justice.” (Stop Explaining Away Black Christian Forgiveness) We are faithful to a God who is just.

The Charleston survivors have remained true and proven their discipleship to the One who gave His life for all mankind: that you will know them by their love. (John 13:35) The Charleston survivors have proven their kinship with God in the worst of circumstances; most of us have trouble with the slightest of wrongs. I can only hope that I can be as faithful and true to those who wrong me.

They have also shown a better way to take on the prejudice of racial hatred, and indeed any wrong imaginable. They have been true to the words of Dr. Martin Luther King, Jr:

With all of that said, and I say this to myself and the white community, this is where the Fear and Loathing in Ferguson needs to come an end. How many more wake up calls do we need? How many innocent black lives need to be given up? It is time to take the Confederate Flag down, regardless of the history people want it to represent; it represents too many other things that are hateful and evil. We need to link arms with our black brethren, stand with them, sing with them, mourn with them and love with them.