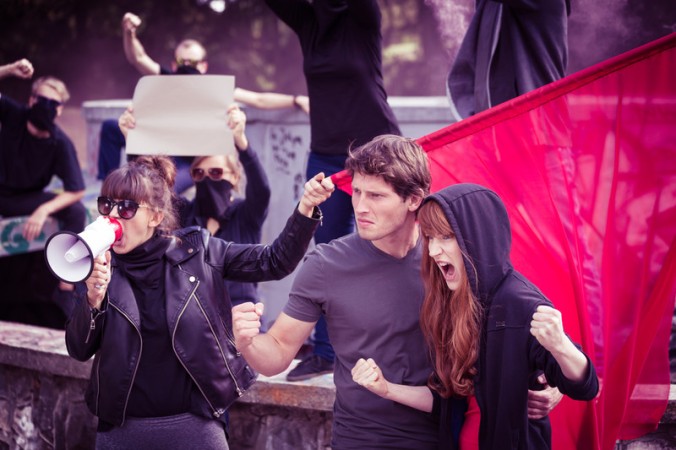 The issues that face society today are bigger than Donald Trump and Hillary Clinton, but these are the two combatants in the political arena amidst the maelstrom of swirling societal currents. Hillary Clinton could become the first women elected President in US history, while Donald Trump represents a clear and present desire to buck the inbred political system that seems to have taken a wrong turn on the way to representation of, by and for the people.

For some reason, a recent article about an “inside view of [the\] Trump pageant controversy” in the local newspaper got me thinking about the present election battle in the context of these larger societal issues. The article, written by Denise Crosby, features Jim Gibson, a resident of a small community 35 miles west of Chicago. Gibson has known Trump for over three decades. They met each other through the Miss Universe organization when Trump purchased it from the brink of financial ruin.

The backdrop of the article, the “fat-shaming” of a Miss Universe contestant winner, goes back to the same time period.

Alicia Machado became Miss Universe in 1996, the year Trump purchased the floundering organization. Gibson says Machado’s claims are “unsubstantiated”. His reasoning is that the Miss Universe contest is all about appearance. Appearance is the main criteria by which the contestants are judged. Machado’s “considerable weight gain and her inability to follow her contractual responsibilities”, says Gibson, were considered a breach of contract because she was the worldwide representative of the organization.

Ignoring the “fat-shaming” rhetoric, Gibson claims that Trump only had two options: take away the title or help her so she could keep the title. He claims that Trump “genuinely wanted to help her”, and the comments were taken out of context and blown out of proportion.

The organization’s business and brand depended on Ms. Machado’s representation. We all know that Trump is a businessman first and foremost. Business is the bottom line for Trump, according to Gibson, not how he views women. This statement is not hard to imagine as true.

Business or not, this example underscores the larger than Trump issues that are coming to a head in this election. The electoral battle pits the first woman presidential candidate against the almost caricature-like Trump, and things have changed considerably since Trump won the GOP nomination. Trump began as the anti-politician candidate, but he has become the “anti-woman” candidate.

Trump protests that he isn’t anti-woman. He claims he has more women in key positions than men in his business enterprises. He will tell you that he “loves” women.

But therein lies the problem, of course. He loves women in the way that women find patronizing and offensive. He seems to represent all that women find distasteful and demeaning. (Lest I sweep too broadly, I should note that not all women feel this way about Trump, but many, many do.)

We all know that Trump isn’t a paragon of political correctness. His knack for unfiltered buffoonery has supplied plenty of ammunition for late night television and the soldiers waging war against old, paternalistic attitudes towards women. The fact that Trump presides over the institution of Miss Universe, by itself, is anathema; but the Machado fat-shaming incident is apparently the blasphemy that threatens to unhinge the female vote in November.

Or should I say, has unhinged the female vote? Again, I don’t find the sentiment to be universal. I know women who look past it, but the outcry is loud and clear.

In many ways, Donald Trump is a product of his time. He has been successful in the established world of business and society that has traditionally been a man’s world. In many ways, that establishment is at stake in this election, and it’s clear that the establishment is not what this county desires. The country is moving swiftly away from the old paradigms and progressing into new ones.

But which paradigms are changing, and which ones remain the same?

Trump initially stepped into a void in the GOP left by the country’s strong desire for anything over than politics as usual. He was the brash revolutionary who bucked the business as usual attitude of institutionalized politics that have held an iron grip on political systems for decades. But things have changed. He finds himself now pitted against an historical movement that has a larger and longer swell than the shifting whims of the GOP and the revolution against the staid political system.

Ironically, Hillary Clinton is the very representative of politics as usual in this election. She withstood those same winds of political change that carried Trump to his present position. She rode the entrenched political machines that the populace despises right through the storm and came out the other end victorious over the old upstart, Sanders, who just couldn’t quite bring his high flying act in for a clean landing.

But, now that she weathered the storms of one change, she finds herself aloft in the wind of another, larger societal change. She is buoyed along by the long coming desire for gender equality that is at the dawn of realization.

Just when we thought that this election was about politics as usual battling apolitical revolutionaries, Hillary Clinton emerges from the storm riding the white horse of social change, and in her wake politics as usual threatens to triumph with a vengeance.

Trump may not be the instrument of change that his supporters hoped he would be. Hillary Clinton may be the kryptonite to Trump’s superpower. The change Trump promises comes anchored to the entrenched attitudes and views that Clinton has lived her life fighting and rooting out. I am not talking about “family values”, though they may be tossed out with the bathwater.

Meanwhile, other battles are becoming distant thunder. Fiscal responsibility has almost become a non-issue. Front and center when Barack Obama ran for office, fiscal responsibility is taking a knee in this election cycle. Clinton stands to the right of Obama on fiscal issues, and so this ground that would seemingly play to Trump’s favor is not the position of advantage many hoped it might be for a GOP victory.

Sensible and prudent world diplomacy, including how we deal with ISIS and the threat of radical Islam, is becoming faint clatter. While Clinton’s hawkish leanings might be an unwelcome shift from Obama’s light tread for some, no one seems to care. Trump’s unpredictable and trigger-happy rhetoric has decidedly drowned out any protestations. People will choose hawkish, but predictable, over a loose cannon nine times out of ten.

Trump’s Mexican wall has become a monolith standing squarely in the way of his progress in this election. He may not be able to mount or circumvent it.

The very politically incorrect ramblings that initially endeared people to Trump, seeming to come as a breath of fresh political air, have turned musty and rank. Try as he might to mask the fetid smell, he cannot.

Caught in no man’s land in this battle are the people who value religious freedom, family values and the lives of the unborn. Many have abandoned common decency to tie their hopes to Donald Trump, baggage and all. There is no toe hold in the Clinton platform for these people who are not willing to shift in these winds of societal change. They find themselves strapped to the cargo hold of the bombardier that is Donald Trump, holding on for dear life.

There is no way for them to turn. Pot toking, Gary Johnson is not a match with his stance on abortion, ignorance of world players and seeming total lack of political awareness. Jill Stein doesn’t even have Gary Johnson’s political capital.

Still, there are rumblings in the background. Hillary Clinton is no saint. She has ridden in the wrong direction of the horse she now rides. Her past dealings with President Bill Clinton’s indiscretions are not the story of feminist lore. “[S]he embraced the Clinton campaign’s aggressive strategy of counterattack: Women who claimed to have had sexual encounters with Mr. Clinton would become targets of digging and discrediting — tactics that women’s rights advocates frequently denounce.” (NY Times Op Ed 10-3-2016)

The “firefighter running to the fire” image of Hillary Clinton, squashing the potentially damning stories, even as they began to surface, with cold and calculating political aplomb, is the image of the type of politics that has been on trial in this election. The fuel that initially elevated Bernie Sanders and Donald Trump to success is the animus against the very politics that Hillary Clinton has navigated so well through a minefield of potentially career ending disasters.

The fact that Bill Clinton’s indiscretions could arguably be Hillary Clinton’s undoing in this present election, though, is part of the narrative that compels her story. Bill Clinton survived it. Donald Trump has survived his own indiscretions but doesn’t even have enough sense to be quiet about them. If Hillary was the one whose dalliances were the subject of the national media, especially in years gone by, would she even still be standing in the political arena?

The obvious answer is grounds to justify ignoring Hillary’s penchant for the most cunning and ruthless politics. She is a survivor in what has always been a man’s world. The country can overlook her mastery of the political world, and maybe even gloat a little about it. What may gum Trump’s political engine seems to be the very fuel that propels Hillary’s success.

Hillary Clinton seems to be in the right place at the right time. She and Bill Clinton have navigated their minefields, and there have been many, with a combination of supreme political tact and unforgiving political muscle. She is everything Trump is not. With Trump, there is no tact whatsoever and no machine behind what little political muscle he has.

In the larger picture, where entrenched party politics are at war with the anti-political revolutionaries, and entrenched attitudes toward women are at war with the rising surge of feminine empowerment, where traditional family values clash with progressive new values, and the old world order strains in tension with a threatening new world order, Hillary Clinton seems to be the woman of the hour.

… and I fear that there is no one to stop her.

Not that I fear feminine empowerment or anti-political revolutionaries. But, big things are at stake. In many ways, important issues of the day are getting lost in the haze of the present war that rages on about Trump’s characterization of soldiers with PSTD, comments made about his daughter, fat-shaming Miss Universe, whether Trump’s unregulated mouth is refreshing or deplorable and whether he was clever to turn a $900 million dollar loss into two decades of no income tax or a tax cheat.