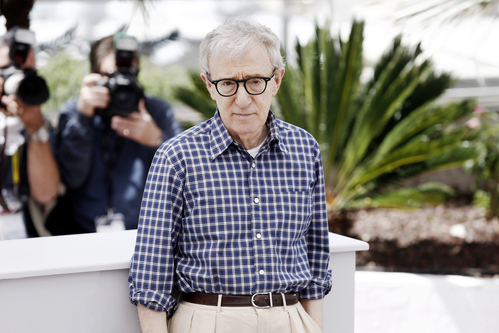 CANNES, FRANCE- MAY 15 : Director Woody Allen attends the ‘Irrational Man’ photo-call during the 68th Cannes Film Festival on May 15, 2015 in Cannes, France. Photography ID: 80414958 Copyright: arp (editorial use only)

An article in the Chicago Tribune, ‘I am ashamed I did this’: Stars reflect on — and rethink — working with Woody Allen, got me thinking about some things I have been chewing on but have been too reticent to explore publicly. Woody Allen, of course, has been the subject of rumors and outright allegations of sexually inappropriate behavior, but he has skated past these allegations like a Teflon President. It seems obvious, doesn’t it, that these allegations should be revisited in light of the recent trend in exposing sexual abuse that have been long hidden in the shadows?

Indeed, the article linked above suggests that time has come. Or should come. But what has taken so long? That seems to be the question of the day as these allegations come tumbling out from all corners.

Woody Allen is famous for his neurotic humor that permeates his acting and directing. He has long been a Hollywood insider, an icon over which the industry has gushed for decades for his innovative, creative and unique style. I never liked it and have never understood the infatuation people have with Woody Allen, and that may color my view of him. More on that later.

Previn was 21 when they started their “fling” and Woody Allen was 56. That makes him 35 years her senior for those who are mathematically challenged. (I had to do the math.) They were 26 and 61 when they married in 1997. Allen started the fling when he was already dating Previn’s mother, and the “fling” started with a father/daughter-like relationship!

Woody Allen claims the relationship “worked” because “I was paternal. She responded to someone paternal.” (See the NPR interview in 2015.)

Let the sink in.

In that same interview, Woody Allen was asked whether the allegations of sexually abusing his daughter, Dylan Farrow, affected his movie career. Allen’s response? “I would say no. I always had a small audience.”

Let that one sink in too. This was just two years ago!

In the midst of the interview Woody Allen said his biggest regret was not graduating from college, and he nonchalantly admits to viewing women as “temporary fixtures” but says he changed and “learned empathy” as he got older.

The interview ended with the question, “What do you want to be remembered for?”

What will we remember Wood Allen for?

Imagine if the allegations made by Dylan Farrow came to light in 2018 instead of 1993 (when he was having his fling with another of Mia Farrow’s daughters). It’s not surprising that Dylan Farrow penned the opinion piece in December, Why has the #MeToo revolution spared Woody Allen? This is what she says:

“I have long maintained that when I was 7 years old, Woody Allen led me into an attic, away from the babysitters who had been instructed never to leave me alone with him. He then sexually assaulted me. I told the truth to the authorities then, and I have been telling it, unaltered, for more than 20 years. Why is it that Harvey Weinstein and other accused celebrities have been cast out by Hollywood, while Allen recently secured a multimillion-dollar distribution deal with Amazon, greenlit by former Amazon Studios executive Roy Price before he was suspended over sexual misconduct allegations?

“Allen denies my allegations. But this is not a ‘he said, child said’ situation. Allen’s pattern of inappropriate behavior — putting his thumb in my mouth, climbing into bed with me in his underwear, constant grooming and touching — was witnessed by friends and family members. At the time of the alleged assault, he was in therapy for his conduct towards me. Three eyewitnesses substantiated my account, including a babysitter who saw Allen with his head buried in my lap after he had taken off my underwear. Allen refused to take a polygraph administered by the Connecticut state police.”

Dylan Farrow’s allegations are not just the memories of things that may or may not have happened long ago; they are preserved in the public records of the court proceedings in in a custody battle over Mia’s daughter. At the end of that custody litigation, a prosecutor said there was enough evidence to try Woody Allen on criminal sexual abuse charges, but he wanted to “spare” Dylan Farrow the further trauma of going through another trial.

So, here are the things I keep thinking about. Why have people been so willing to look the other way about these things for so long? Do our reactions depend on whether we like the person? Do they depend on whether the person is famous? Does it matter that he made “good movies”? Does it matter that Woody Allen is considered a man of great artistic taste?

Are my reactions to these things, which have long disgusted me about Woody Allen, affected by the fact that I don’t like his movies?

Ah, there’s the rub! I have long shunned Woody Allen movies because of his quasi-incestuous relationship with Previn, but the truth is, which I am willing to admit, I never liked his movies to begin with. They never resonated with me. They irritated me.

But what if I liked them? What if I thought his movies were masterpieces? Should that make any difference?

In the original article that prompted me to write, it contains statements from various people. Among them are the following:

“I worked [with Allen] three times and it was one of the privileges of my career.” Alec Baldwin

“From the way I saw him with his family, I never saw him be anything but an incredible person and a really great dad.” Miley Cyrus

“It’s not like this is somebody that’s been prosecuted and found guilty of something….” Scarlet Johansson

“It’s very dangerous to factor in things you don’t know anything about. I … know my experience. And my experience with Woody is he’s empowering to women.” Blake Lively

Yes, it is a difficult discussion.

We need to realize, too, that “bad” people can do good things. By some accounts Adolf Eichmann was just an average family man. He wasn’t the monster we imagine would be at the helm of the Holocaust.

Usually, we prefer our villains bigger than life – mean, nasty, strong, irrational, ugly, and so forth. And history has occasionally provided us with such people. But many of the men who have led notoriously wicked lives or who committed unspeakable atrocities, were in many respects, not so different from the rest of us. (Adolf Eichmann Bureaucratic Murderer, by Dennis Pollock)

Elie Wiesel, the famous Holocaust survivor, thinker, writer and speaker, urged during his life that we are all capable of the greatest good and greatest bad, and we dare not forget that, lest we find our ourselves in circumstances in which we do not have the resolve, or self-awareness or moral armor to resist doing the bad thing. If we don’t grasp that realization, he warned that we are doomed to repeat history.

2 thoughts on “The Woody Allen Factor”