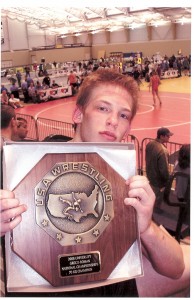 Ok, I stole the title (See College Softball is not a Career), but it is too true and too relevant not to “re-appropriate”. It could be wrestling, volleyball, hockey, gymnastics, swimming or any of the sports that become the central focus of the lives of children and their parents.

Don’t get me wrong. I loved every minute of it! My kids grew up in the IKWF (Illinois Kids Wrestling Federation), the Illinois state arm of USA Wrestling. They started wrestling when they were 6 and 8. They have wrestled in college (and are still wrestling), and we have learned a lot along the way.

I cannot say that I had the best perspective when it all started, or that I did not have a long way to go in the middle of it all. My confession is that I, too, was caught up in the thrill of the competition and had trouble seeing over the horizon. In the midst of it, the competition seems to be an end in itself, and parents can be as guilty of seeing it that way as the kids. In truth, maybe more so; and we should know better.

The article from which I borrowed my thoughts lays the cold, hard truth on the table:

“Every softball player’s career ends at some point. Usually too soon. If you did not parlay your softball skills into an educational advantage, it was a pretty bad investment.”

Substitute wrestling for softball, or volleyball, or whatever. It is the same. Sports is not a career for all but the very, very rare exceptions… and those exceptions are primarily coaches who received a college degree that allows them to coach in middle school, high school or college. (Professional wrestlers don’t count. Don’t get me started!)

My kids grew up in the IKWF when the “elite” wrestling clubs were just starting. Before that, communities had clubs that practiced at the local high school or park district facility. They were community orientated. With advent of the “elite” clubs, the community clubs were no longer good enough. Parents would travel past two towns, three towns, two counties, across the state and even to other states to these elite clubs. It happens in many youth sports.

I knew people who traveled an hour and half to two hours each way three or more times a week so their son could wrestle with an elite club. They would take their 8-year olds to Tulsa and Reno and other “elite” tournaments all over the country on a regular basis to get them the best competition. I have been in wrestling rooms in May, long after the wrestling season is over, with young kids wrestling hard, grueling practices every day of the week.

Though we never jumped on the elite club train, my kids have been there too in May, June, and July. It was their choice. They wanted to get better. They loved the competition. I loved it too!

One parent told me, “All this money we are spending now is going to pay for their college.” It did not work out that way for their oldest son. He washed out of the DI school in less than a year. Their second son, who was good enough to get a “full ride” to many places, chose the top wrestling school at the time for just a partial scholarship.

It is almost delusionary to plan on a full scholarship in wrestling. DI colleges only 9.9 full scholarships to hand out. There are 10 spots on the team, and wrestlers get hurt. They need backups to their backups. There might be thirty to forty or more wrestlers in every DI room. Almost no one gets a full scholarship. Other sports are similar in the percentages of athletes who can pay for their college through sports.

One smart parent commented to me that they could put away all the money that is spent on elite clubs, travel and gear and be able to pay for college themselves when the time comes.

Wrestling has helped my sons open doors and pay for some of college, but wrestling has not given them a degree (or a career). I have to admit that they could have spent more time focusing on school, and that would have given them more skills to earn their degrees. One of my sons has wrestled at the World/Senior/Olympic level, but he is till pursuing his degree at the age of 24. At that level, wrestling is a job, though there is no career in wrestling. The degree and the career is up to him, and, at this point, it will be in spite of wrestling.

Wrestling is valuable experience, building character and self-esteem. It brings fathers (and mothers) and sons (and daughters) together in unique, relationship building ways. It can help pay for college. But, it is not a career. It needs to be kept in perspective. It is a stepping stone, a path, a vehicle by which a child can journey to a secure adulthood with some advantage… if it is kept in the right perspective.

My brother tells me that one local club keeps that perspective with a statement on the wall that says, “Don’t let wrestling use you; use wrestling” (or something like that). Wrestling is a great journey, but it is not a destination – at least for the 99.99%. Take what you can from it, but do not let it be the end all.

My younger son went through a difficult time his freshman year in college. He was burned out. He felt that all he saw was the inside of a wrestling room. It nearly derailed him. When he took a step back and found a different perspective, his energy for wrestling, and for something beyond wrestling, was revitalized. Jordan Burroughs, after he won an Olympic gold medal, went through a time of letdown. He had reached the pinnacle, and the pinnacle was not fulfilling in and of itself. He was revitalized when he latched on to a higher purpose.

“If someone is promoting that your athlete younger than 14 start specializing and playing one sport year round, please understand that more money doesn’t guarantee success – you can’t buy your kids an athletic future. Often the people who want kids to specialize at a young age are the adults who profit from it.”

5 thoughts on “College Sports is Not a Career”