Science, philosophy and faith are each interesting subjects in themselves and even more interesting when considered together. In this piece, we take a quick look at the philosophical principles of determinism, necessity and chance, springboard to consideration of the observations of Stephen Hawking on the subject of determinism and free will, and finish with  some observations about faith and love.

We start with determinism, defined as “the philosophical idea that every event or state of affairs, including every human decision and action, is the inevitable and necessary consequence of antecedent states of affairs.” Many modern scientists and philosophers alike believe we live in a world that is deterministic. Richard Dawkins, Lawrence Kraus, Daniel Dennet and others ascribe to this view.

In his show Genius, in which Stephen Hawking walks three “average” people through a series of exercises that lead them to understand great, nuanced principles of science, he agrees that the universe, including people, are determined by the laws of physics. He asserts that, if we could know where every cog in the machine of the universe is at any one moment, the laws of physics would allow us to know what would happen at any point in time. Therefore, Hawking  says, free will is an illusion.

Some scientists use the idea of necessity as the explanation for why we exist and where we come from. Because we are, and because the world is such that it perfectly supports life, including us, the world is the way it is because of “necessity”. (To me, this is the equivalent of the “just because” explanation children get from their parents. The underpinnings of this idea are much more complex, of course. Still, it is a less than satisfying explanation.)

Nothing occurs by chance (maton), but there is a reason (logos) and necessity (ananke) for everything.

“The idea that Chance and Necessity are the only two logical options, and that neither is compatible with free will and moral responsibility, is the basis for the standard argument against free will.”

“The first thinker to suggest a physical explanation for chance in the universe was Epicurus. Epicurus was influenced strongly by Aristotle, who regarded chance as a fifth cause. He said there must be cases in which the normally straight paths of atoms in the universe occasionally bend a little and the atoms ‘swerve’ to prevent the universe and ourselves from being completely determined by the mechanical laws of Democritus.”

From there, Hawking demonstrates how electrons at the subatomic level behave very differently than the constants of physics at the macro level. Electrons are here and there and neither here nor there. “They are not in an exact place,” according to Hawking. The laws of nature are constants finely-tuned at the macro level, but subatomic particles do not act according to the same rules. Their positions are indeterminate and ever changing.

Hawking observes that Werner Heisenberg developed the Uncertainty Principle from the fact that subatomic matter defy location, to which Einstein famously quipped, “God does not play dice with the world” (not wanting to concede that randomness was possible). Since then, Heisenberg’s principle has stuck.

We live in a world in which the large structure is determined and constant but the substructure (the structure we cannot see) is indeterminate, allowing for deviations. Hawking says, “The universe is determined, but there are options, like forks in the road.”

Enter the Many Worlds Theory. The Many Worlds Theory suggests that that “all possible outcomes occur” and “everything that can happen does happen.” The idea is that a virtually infinite number of worlds exist in which the decisions made at the forks in the road play out. 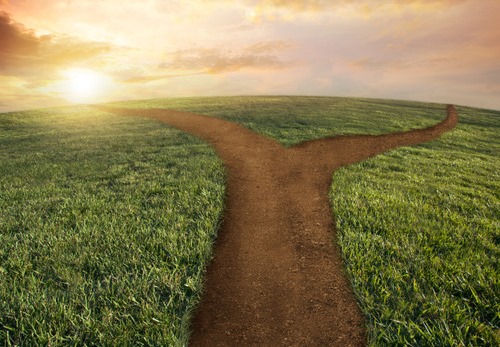 For Hawking, all the constants necessary to give rise to life, and to you and me, were set and determined at the moment of the Big Bang. “The universe creates stable conditions in which complex creatures can evolve.” Hawking concludes that the universe we live in “exists just for you” and me. The take away for Hawking is that the “universe in which you exist gives rise to you.”

The interesting thing to me in all of this: scientists, who largely have thrown off the idea of God and look only for natural explanations, have to postulate infinite universes and “necessity” to make sense of what they see. The “natural” (as in obvious) explanation is God, the uncaused Cause, who exists outside space time. It is God, not an infinite number of worlds of which we really have no evidence, that is tha parallel dimension that encompasses space time).

Science tells us that the universe is finely-tuned and has been finely-tuned from the first millisecond. The tension between the experience of free will and the apparent determinism of the universe is another example of this fine-tuning, but in a way that scientists might not want to acknowledge. In learning the laws of physics, we come to the apparent conclusion of determinism, but dig a little deeper and look into the world of the unseen at the atomic level, and we see evidence of chance, or at least possibility of deviation, underneath the macro frame of determined physical laws.

The possibility of deviation that might allow free choice in a reality that includes an infinite number of parallel universes (or simply God, the eternal Being who exists outside of space time) arises from what is unseen. This tension of determinism at the macro level and in-determinism (or at least a possibility of deviation) at the micro level is another kind of fine-tuning that not only allows for free choice (given the existence of parallel universes… or God!); it also arises from the unseen (subatomic) reality of the world we live in.

This sounds somewhat like “faith is the assurance of what we hope for and the certainty of what we do not see.” (Heb 11:1)

But, the most interesting thing to me is how this universe can yield the disdainful confidence of the atheist on the one hand and the awe-inspired faith of the believer on the other hand. The higher, farther, deeper and wider we go in our knowledge and understanding, regardless of the amount of knowledge and understanding we have, the world is capable of both positions – though neither camp will admit the other.

If there is a God, and I believe there is, and if that God created us in His image to have fellowship with Him in a reciprocal (love) relationship, He would have to create a world in which we are not compelled into that relationship.

This is further illustrated by Richard Dawkins’s assertion that the greatest achievement of mankind was coming to the conclusion that we do not need God (which he credits chiefly to Darwin). If we could not come to any conclusion other than God exists, we would have no choice but to concede that God exists. In such a world, the very magnitude of God’s being would compel us to concede that He exists and all that such a sure knowledge would suggest.

But we live in a world in which we can conclude that we have no need of God. Yet, the opposite conclusion is ultimately as compelling. This is another kind of fine-tuning: a fine-tuning in which the evidence for and against God is equally compelling. This kind of “fine-tuning” creates the perfect conditions for choosing God without compulsion. It is a perfect world in which we can truly enter into a love relationship with our Maker of our own choosing.